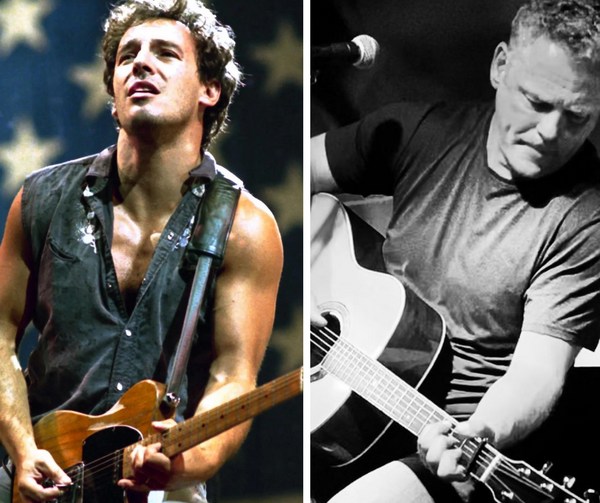 I was 13 when I found the first love of my life. My parents had given me a little transistor radio, black, about 10 inches in size, that I think probably came from Radio Shack. It was a ticket to another world. Music was always playing in our house – my dad had the radio constantly tuned to CBC FM, which played classical music non-stop during the day, and the opera from the Metropolitan in New York on Saturdays. But once I had my own radio, I could explore the airwaves and discover what became my first true passion: pop songs, rock songs, the music that would inspire me, and ultimately lead me to spend my life making music.

I listened to that little radio night and day. I also had a small portable cassette recorder that I would put next to the radio speaker so that when a song came on that I liked, I could quickly press record and tape the song (complete with DJ intro) to listen to over and over. The fidelity was terrible. The passion was off the charts.

I started with AM radio. In Canada, the radio stations are mandated to play a certain percentage of Canadian artists, so I was introduced to the Canadian tradition of singer-songwriters: Gordon Lightfoot told of “The Wreck Of The Edmund Fitzgerald”, Bruce Cockburn was “Wondering Where the Lions Are”, Dan Hill moved me with “Sometimes When We Touch”. But after hearing “Brass In Pocket” by the Pretenders for the umpteenth time in the same day (it was in heavy, heavy rotation!) in desperation I flipped the switch to FM and found the FOX.

CFOX-FM out of Vancouver, Canada had the slogan “The Fox Rocks!” Their schtick at the time was to play the first part of a disco song and then rip it off the turntable to the sound of machine gun fire. And it was on the FOX that I first heard this singer, his songs were powerful and passionate, he had a unique mumbling way of singing, his band featured the piano (my first instrument) prominently, and his lyrics were intelligent and emotional. Every time I’d hear one of his songs, I’d wait until the end of the set for the DJ to come on and tell me the name of the band, but I’d never seemed to be able to catch who it was.  I’d try and sing the songs for my friends at school, imitating his style, asking “who the heck is this”?

That singer that so captured my imagination was Bruce Springsteen. At that time the radio was mostly spinning tracks from his latest record, “Darkness On The Edge Of Town”, songs like “Bad Lands”, “Prove It All Night”, “Candy’s Room”, “The Promised Land”. I loved it. And I’ve continued to love it ever since. When it comes to love, you never forget the first.

If you read or listen to many interviews with rock musicians, there’s one story that comes up more often than any other. There are variations on this theme, but it usually goes something like this: “I was a teenager when I saw The Beatles on the Ed Sullivan show, and that’s when I knew I had to be in a rock band.” I was too young to have seen The Beatles on Ed Sullivan (although I loved the Beatles and my first band played nothing but Beatles songs. But that’s another story…) but I know exactly how they felt. Because when I was 15, one fateful night I saw a TV show called “The Legends Of Rock ‘n Roll”. It featured all sorts of live clips starting in the 50’s with Chuck Berry, Jerry Lee, and of course Elvis. And as the show progressed forward in time, towards the end of the program was a clip of Bruce and the E-Street Band doing a live version of “Rosalita”. What a performance! Bruce was electric, all over the stage, stunningly charismatic, the band was rocking, the Professor, Roy Bittan, played the hell out of a real grand piano, Clarence was growling on the tenor sax. THAT was when I knew what I wanted to do with the rest of MY life. I stayed up for hours that evening banging away on our old, out of tune upright piano, trying to express that same energy and sheer joy of living. The trajectory of my life was forever changed.