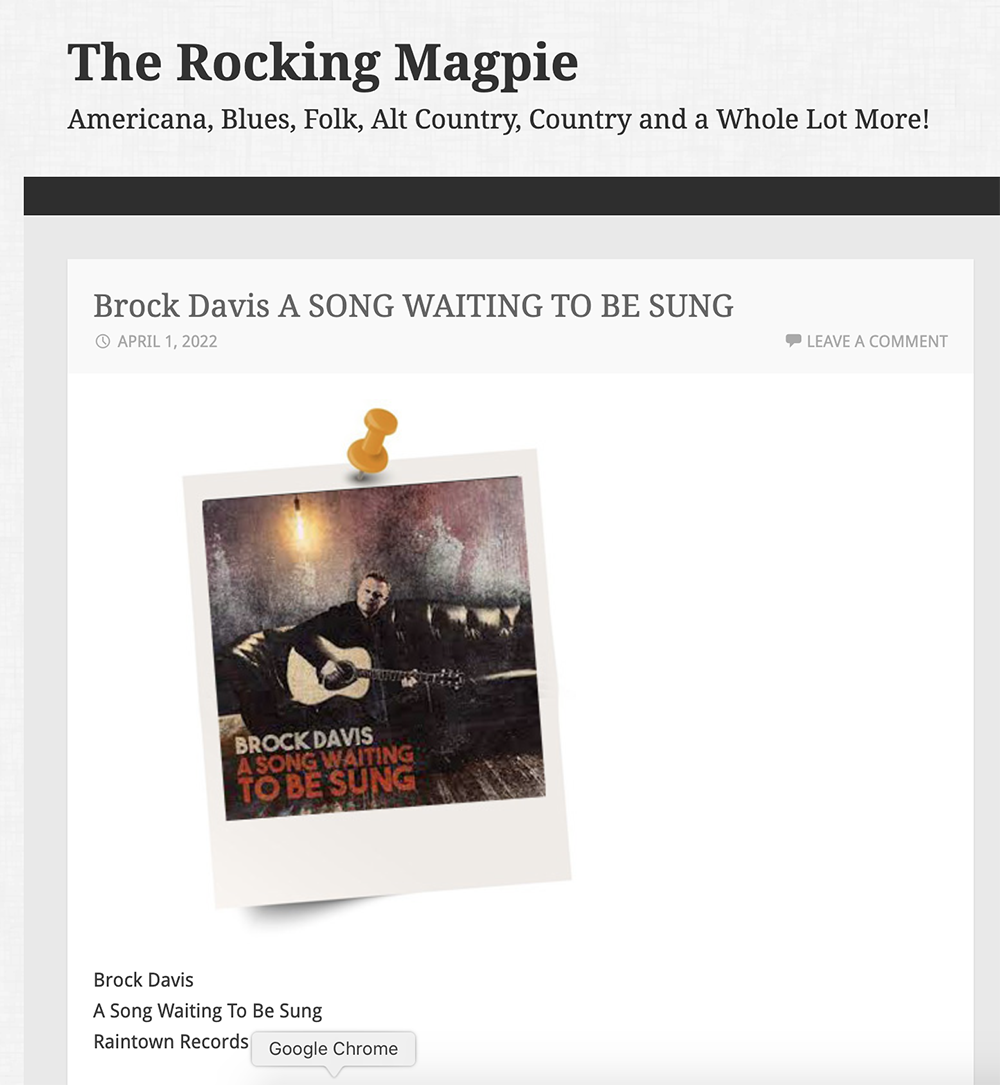 Intimate, Personal and Imaginative Songs That Create a Musical Novella

On the day this album was released we had a choice between 14 albums to review …. which left me feeling a bit like Damocles in the Bible; having to choose what to review and what to miss out.

But you can thank my trusty IPhone for picking out a track from this release last night on my way home from work ….. which in turn reminded me how much I’d enjoyed the album a month or so ago.

When you know a little of Davis’s background it helps appreciate the cathartic way he confronts childhood trauma; the demise of an unsustainable marriage; and recent years going 100 miles an hour running a Silicon Valley startup and coming out the other side relatively unscathed.

Straddling Country Rock and Americana storytelling with ease; the album starts with I Choose Love, a delicate and introspective tale about his divorce; but with the narrator choosing to remember their early days and the love and happier times that they had once shared; but no longer can.

Davis immediately cranks up the tempo on the following track Can’t Get Close Enough To You which actually ‘punches well above its weight’ as Davis shows his powerful vocal range on a blistering song that reminded me a bit of a Bob Seger track; whose name I can’t remember!

Later Brock treads a similar, but much softer and path with Second Time Around; as Brock sings about a real life ‘second chance’ love affair; which was the track my IPhone played; and a song I’ve come back to it a few times in the intervening days.

I love the way Davis uses and changes the mood right throughout the album; he drops in Soft Rockers like Bet on Love and the intense We Will Rise while surrounding them with beautiful passionate and powerful Marking Time and I Get It Now; which somehow seem more intimate when juxtaposed alongside the more commercial numbers.

Because of the variety in Davis’s writing selecting a Favourite Song has been as difficult as usual. At first it was going to be the brooding title track; A Song Waiting to Be Sung, which builds and builds until it becomes a crescendo; and it’s immediately followed by the beautiful Your One and Only Life; which is for and about the singer’s daughter ….. and will touch the heart of many who hear it.

Then; there is the bravest song I’ve heard in years …… Bullets and Blood. The first night I heard it I couldn’t believe my ears ….. and had to take it back to the beginning and listen intently! Phew! The melody is as Country as Country gets ….. but the lyrics will set your average redneck’s hair on end; as Brock dictates a story of ‘the love that cannot be named’ …… sadly in 2022, Gay Love is still a taboo subject and I applaud Brock Davis for having the chutzpah to not just write this song but release it too …. and for that it’s my Favourite Song here.

There’s a lot going on in Brock Davis’ songs, with no two being not just the same; but not even similar; yet when arranged like this create a musical novella; worthy of a much bigger audience than the album is; sadly likely to receive.