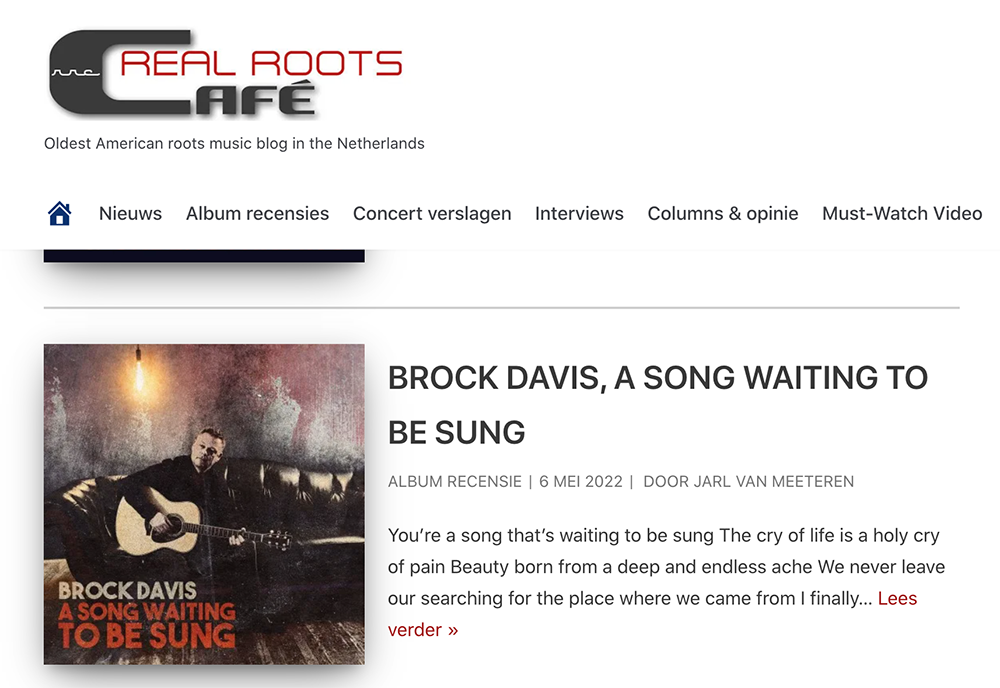 Thirteen songs about love, forgiveness and second chances. Thirteen songs in an indie country and Americana style, the style that suits Brock Davis best. Thirteen songs that have been dormant in him for a long time and now come from his heart and body. Hence the title of this album: A Song Waiting To Be Sung. Finally, he says in a recent interview, after a hard childhood, a miserable divorce and a job at a Silicon Valley start-up that ended up in a burnout, to express himself, he went back to what he loved best, his favorite thing: the music. Therefore, given this, the whole album exudes positivity. Each song has its own melody and rhythm in which the text and the music complement and reinforce each other. That may sound obvious, but in music it does not have to be. Here, on this album, it's in balance; with the help of, in addition to Brock Davis on vocals, Pat McGrath on acoustic guitar and mandolin; Justin Ostrander on electric guitar; Duncan Mullins on bass; Marcus Finnie on drums; Scotty Sanders and Russ Dahl on pedal steel and Michael Hicks on B3 organ and piano. While the fantastic background vocals come from Kyla Jade, Blair Whitlow, Grant Vogelfanger, Matt Dame, Kristin K. Smith and Tania Hancheroff; in short, a select group of studio musicians who have collaborated with Keb Mo', Taj Mahal, Blake Shelton, Carrie Underwood and Michael MacDonald, among others. The beautiful clear production of this surprisingly beautiful album is by Brock Davis himself.

I'm not going to describe the album song by song. The songs form the album, make it a whole and it would take away the magic if I discussed them piece by piece. As a reader, you're already interested, it's up to me to make you more curious and I hope you trust me. A Song Waiting To Be Sung: a beautiful, personal, almost intimate album made with love. First class music with occasional ruffles, real music from a first class musician.